Mission: The mission of the Anna Quadrino Fund is to provide information, resources, and training to Caregivers and the public about Alzheimer's disease while also supporting researchers in the goal of ending Alzheimer's disease. 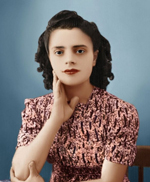 An immigrant from Italy to America, Anna Quadrino led an extraordinary life. Trained to be a seamstress in Italy, the pattern shaped by the force of destiny required her to meet many challenges with courage, determination, and sacrifice.

Anna died at age 90 from complications of Alzheimer’s disease January 30, 2012. She was born Anna lzzo on May 22, 1921 in the small town of Torchiati in the city of Montoro Superiore in the province of Avellino, Italy. This web site established and written by her son William, is named for her honor.

She was the beloved wife of Louis Quadrino, her second husband, who died in March of 1995. The day Anna passed away would have been their 19th wedding anniversary. Her first husband William Russo, who she married in Italy in 1949, died in February of 1962. Both Louis and William were World War II Veterans. William and Anna had two children together William and Anthony.

Until her retirement Anna was a seamstress sewing the finest evening gowns and wedding dresses. She was a member of the Italian Dressmakers local of the International Ladies Garment Workers Union (now known as UNITE HERE). Anna loved to sew. Stitching material together was kind of like when people would visit with her, she would bind with you in a seamless way until you felt a part of her and her part of you. She lived that way. Her life was characterized by creating garments and in repairing them...just like she did with her love and kindness.

The Journey with Alzheimer’s disease

When did it begin? Do we ever really know? It's difficult to pinpoint when Anna began the journey along the path of forgetting, the wandering and the helplessness of Alzheimer's disease. I remember episodes at least twelve years before she passed away.

Her spirit lives on through the memories, and her creations and repairs and acts of love, courage, and kindness.

It was a challenging experience for the many caregivers and professional staff, medical, health care professionals, family and friends, who assisted her and me as her primary caregiver. There were some difficult times, medical emergencies, frustrations with her behavior but more than that there were wonderful moments. Moments of joy created in the process by so many caring people that enlivened her spirit and helped alleviate the anguish of her family.

The family of Anna Quadrino thanks the Alzheimer's Disease and Related Disorders, New York City, Inc. for their priceless support and resources that helped her caregivers provide Anna with knowledgeable and compassionate care and hope.

For further information about the Anna Quadrino Fund contact:

Facilitated by a trained leader, and meeting in person; many meet weekly.